Message from the Police Chief

Please welcome Charlie Boeschenstein.  He is our new police recruit.  Charlie will start at the police academy in Richmond Kentucky on December 12th.

The police academy is 20 weeks long and is followed by 6 to 8 weeks of training back here in Southgate.

Remember to keep your cars locked when Christmas shopping and put valuables in the trunk.  Please call the police dispatch at 292-3622 anytime you see something suspicious or need the police.

Have a safe and Merry Christmas!

The speed limit on city streets is 20 mph unless otherwise marked.  Some streets are marked at 15 mph. Please drive safely and obey all traffic control devices.

801 Chief John Christmann
Chief Christmann retired from the Boone County Sheriff’s Office with over 20 years of Law Enforcement experience.  He was a member of the Criminal Interdiction Unit for the last several years of his career.  His specialty, while serving with the Boone County Sheriff’s Office, was drug interdiction and commercial vehicle inspection.  Chief Christmann was responsible for or assisted with the seizure of hundreds of thousands of dollars in drug-related funds and illegal contraband.  He also is a certified instructor for the US DOT/Federal Government, training federal, state, and local officers from all over the United States.  He is a certified Hostage Negotiator.  He is a graduate of the University of Cincinnati with a degree in Criminal Justice and a graduate of Northern Kentucky University with a degree in Organizational Leadership.  Chief Christmann graduated from the prestigious Criminal Justice Executive Development (CJED) Class #1 in Richmond Kentucky.  He was hired as Chief in February of 2012 to re-establish the new Southgate Police Department.  Chief Christmann was the past President of the Campbell County Police Chief’s Association.

805 Sergeant Danny Johns
Sergeant Johns began his career in November of 1988 as a part-time officer with the Highland Heights Police Department.  He transitioned into a full-time officer on July 1, 1990.  During his career he was promoted to Sergeant in January 1996 and in October 2007, he was promoted to Lieutenant.  He is a graduate of the Criminal Justice Executive Development (CJED).  Sergeant Johns received the Medal of Valor while attempting the arrest of a bank robber who fired multiple times at police in Alexandria.  He also received the award for most DUI’s arrested as well as most seatbelt citations in the department for multiple years.  He retired after 21 years of service in December 2009.  In 2012, when the new Southgate Police Department was formed, Sergeant Johns returned to duty.  Sergeant Johns works directly with the Chief of Police, handling most of the administrative/technology tasks and other duties as required.  Sergeant Johns is the direct supervisor of the Patrol Staff.

806 Sergeant Ronnie Gross
Sergeant Gross was born in Harlan County Kentucky and graduated from Evarts High School.  He obtained a degree from Union College and has been involved in law enforcement for twenty-seven years.  He is a graduate of the Academy for Police Supervisors (APS).  Sergeant Gross completed the Criminal Justice Executive Development (CJED) training in December 2017.  He has served in Police Departments in Florence, Southgate, and Newport.  Sergeant Gross returned to the City of Southgate in August 2012.  During his career, he has worked in patrol, and investigations, and was a member of the SWAT team for eleven years.  Sergeant Gross has won numerous awards for DUI enforcement and has received numerous letters of recognition for his work while investigating murders, robberies, drug trafficking, and other felony crimes.  Sergeant Gross is currently in charge of all investigations as well as Internal Affairs.  He also assists in supervising the Patrol Staff as needed.  Sergeant Gross received the 110% award while working with the Newport Police Department and is happy to return to the City of Southgate.

818 Officer Dave Fillhardt
Officer Fillhardt comes to the City of Southgate with over 25 years of law enforcement experience.  He retired from the Campbell County Sheriff’s Department in 2013 after 20 years of service.  While in the Sheriff’s Department he served as a Field Training Officer, Police Training Officer, and firearms instructor and investigated sex offender registry compliance.  Officer Fillhardt started his police career in 1988 as an officer with the Falmouth Police Department, where he served as a Field Training Officer, firearms instructor, and shift supervisor.  Officer Fillhardt also served with the City of Alexandria Police Department, and for 15 years with the Southern Campbell Fire Department where he served as president, vice president, lieutenant, emergency medical technician, fire/extrication training instructor, and is an N.F.A. certified arson investigator.  He came to the Southgate Police Department in March 2014.

Officer Lawson is a graduate of DOCJT Class 224 from 1991.  He initially retired from the Highland Heights Police Department as a Lieutenant in 2013.  He previously served for several years as the department’s K-9 handler and bike patrol officer and is a graduate of the DOCJT Supervisor Academy.  He received several commendations for his work as a police K-9 handler and Governor’s Awards for DUI arrest.  Officer Lawson returns to Southgate Police Department in 2013.

Officer Boyce was born in Elmhurst, Illinois just outside of Chicago and he is a graduate of Immaculate Conception College Prep School. In November of 1997 he started his law enforcement career in the United States Air Force, as a Security Forces Member. Throughout his military career Officer Boyce performed several duties while serving in Security Forces. These duties included, Response Force Member, Elite Gate Guard, Security Forces Armorer, Fire Team Leader, Military Working Dog Handler, Military Working Dog Trainer, and Flight Chief. Officer Boyce served overseas on seven deployments in several countries to include Afghanistan, in support of Operation Enduring Freedom and Iraq, in support of Operation Iraqi Freedom and Operation New Dawn. He is a graduate of the USAF Airmen Leadership School, the USAF Non-Commissioned Officer Academy, and the Community College of the Air Force. Officer Boyce has been recognized by senior military leadership, to include the Secretary of Defense, for outstanding performance, leadership, and dedication to duty. His awards and decorations include but are not limited to five Air Force Achievement Medals, three Air Force Commendation Medals and one Army Commendation Medal. Officer Boyce retired from active duty in August of 2014 after close to seventeen years of service. After he retired from the Air Force, Officer Boyce was accepted as a cadet in class 92 of the Kentucky State Police. When he graduated the KSP Academy in January of 2015 Officer Boyce served as a State Trooper assigned to Post 14, Ashland. In February of 2016 he transferred to Post 6, Dry Ridge. While in service to the State Police, Officer Boyce was lauded with several specific contacts for his stellar performance and community service. Officer Boyce came to work for the Southgate Police in September of 2021.

Officer Stacey May began his Law enforcement career in February of 1999 with the Kentucky State Police. After graduating from the KSP Academy he was assigned to the Dry Ridge post where he served the citizens of Grant county. Officer May was named Kentucky State Trooper of the year for the Dry Ridge post in 2003. During his career, he was promoted to the rank of Sergeant in August of 2005. He was promoted a second time to the rank of Lieutenant in November 2013. After being promoted he was assigned to the Bowling Green post as the Operations Lieutenant.  Officer May retired from the KSP in August 2017. He started his second career as a patrolman with the Southgate Police Department in March of 2018.

816 Officer BT Pickett  (Part-time)
Officer Pickett began his law enforcement career in 2003.  Prior to coming to Southgate, he worked for the Boone County Sheriff’s Department where he spent two years as a member of the SWAT team.  Officer Pickett began his service with the Southgate Police Department in September of 2012.  He is currently the police department’s firearms instructor.

Officer Mitchell started with the City of Southgate in August 2021.  He also works for the City of Florence Fire Department.

PSD (Police Service Dog) Cody, a German Shepherd, started with Southgate in June 2018, when he was one year old.  Cody was trained to be a dual-purpose PSD.  Cody is trained in narcotic scent detection, apprehension, and the tracking of people and articles.  PSD Cody and Officer Garrett Haynes were nationally certified as a team in March 2019 through the North American Police Work Dog Association.  PSD Cody lives with Officer Haynes at home with his family.  Cody serves the City of Southgate and if needed, the surrounding cities.

Going on vacation?  Have SGPD check on your home while you’re away!  Email completed forms to:  police@southgateky.org or drop them off at 301 West Walnut Street.

Used for non-injury, minor vehicle collisions on private property, or during inclement weather when officers are not available. 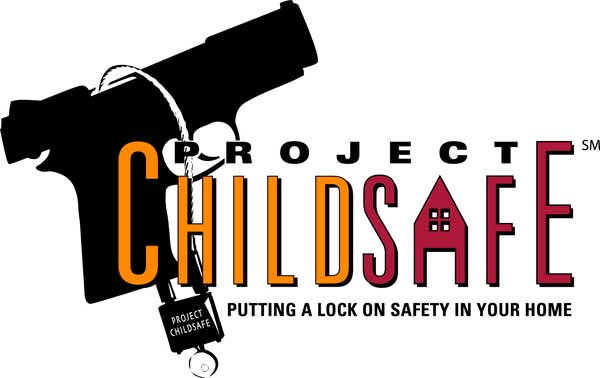 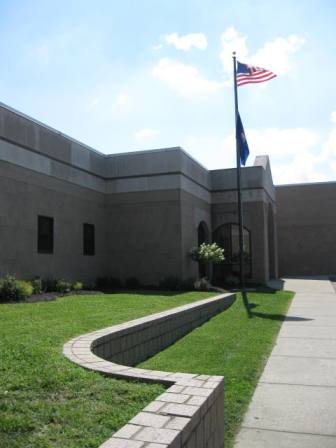 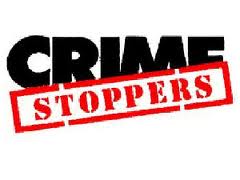 Stay connected to the information that matters most to you!

Sign up for alerts from the Southgate Police Department & other public safety agencies in your area.  Register to receive trusted, neighborhood-level public safety and community information at no cost, by text message, email, and web. 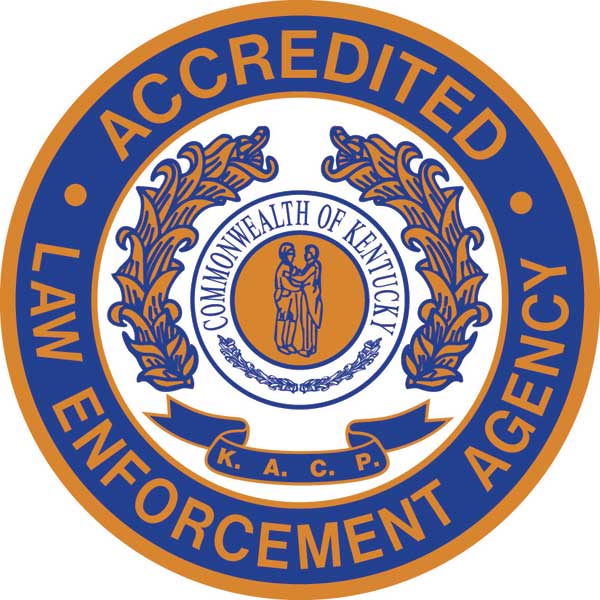 The Southgate Police Department was awarded accreditation by KY Association of Chiefs of Police Law Enforcement Accreditation Program in June 2018 for four years.  The City of Southgate and the residents can be very proud! 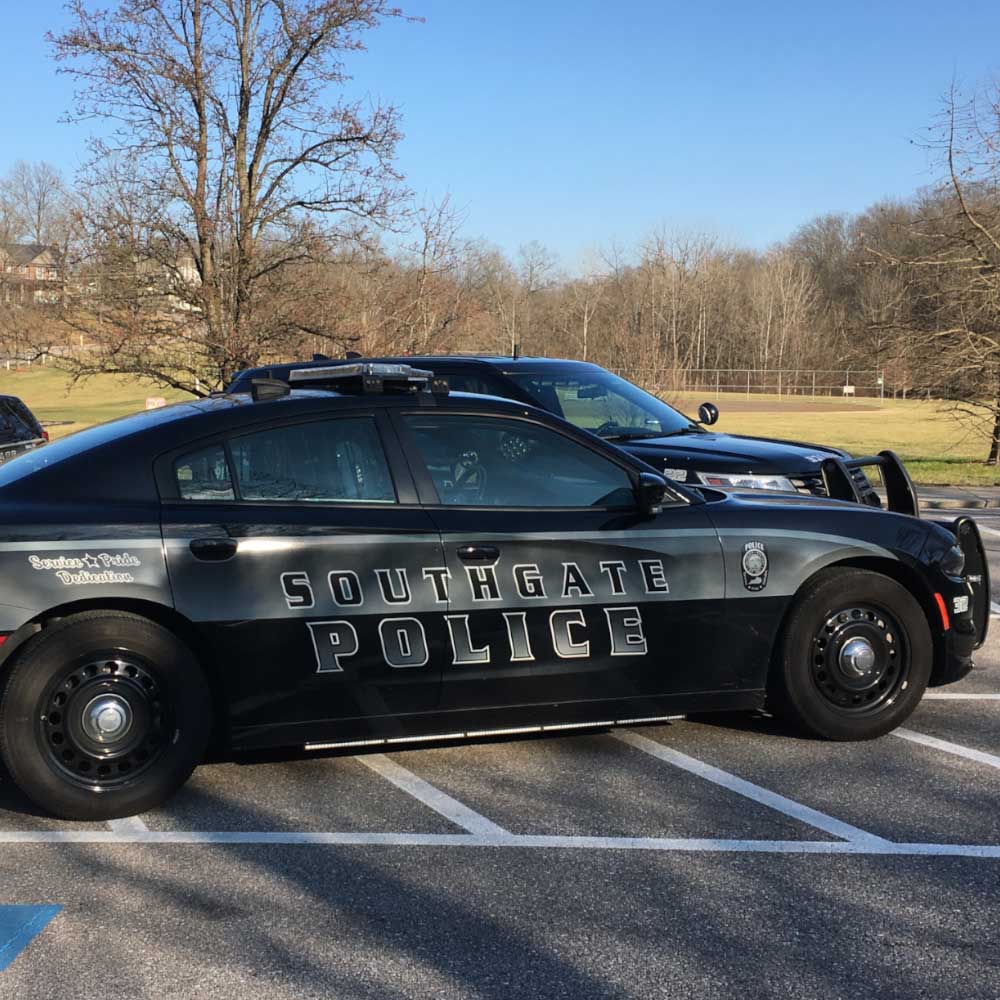 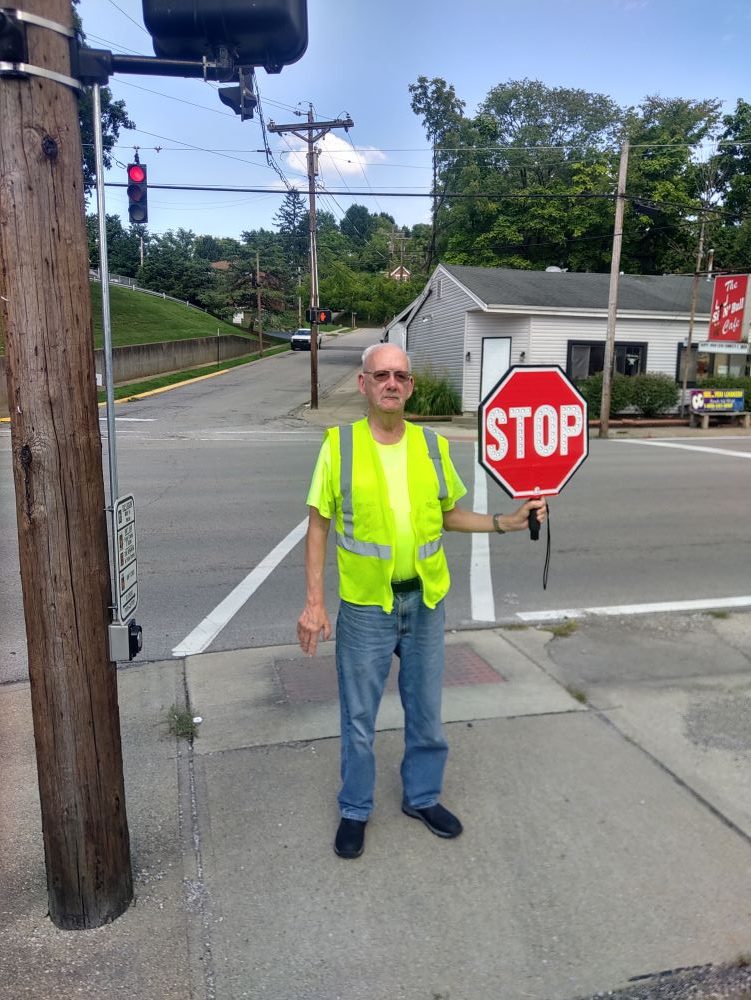 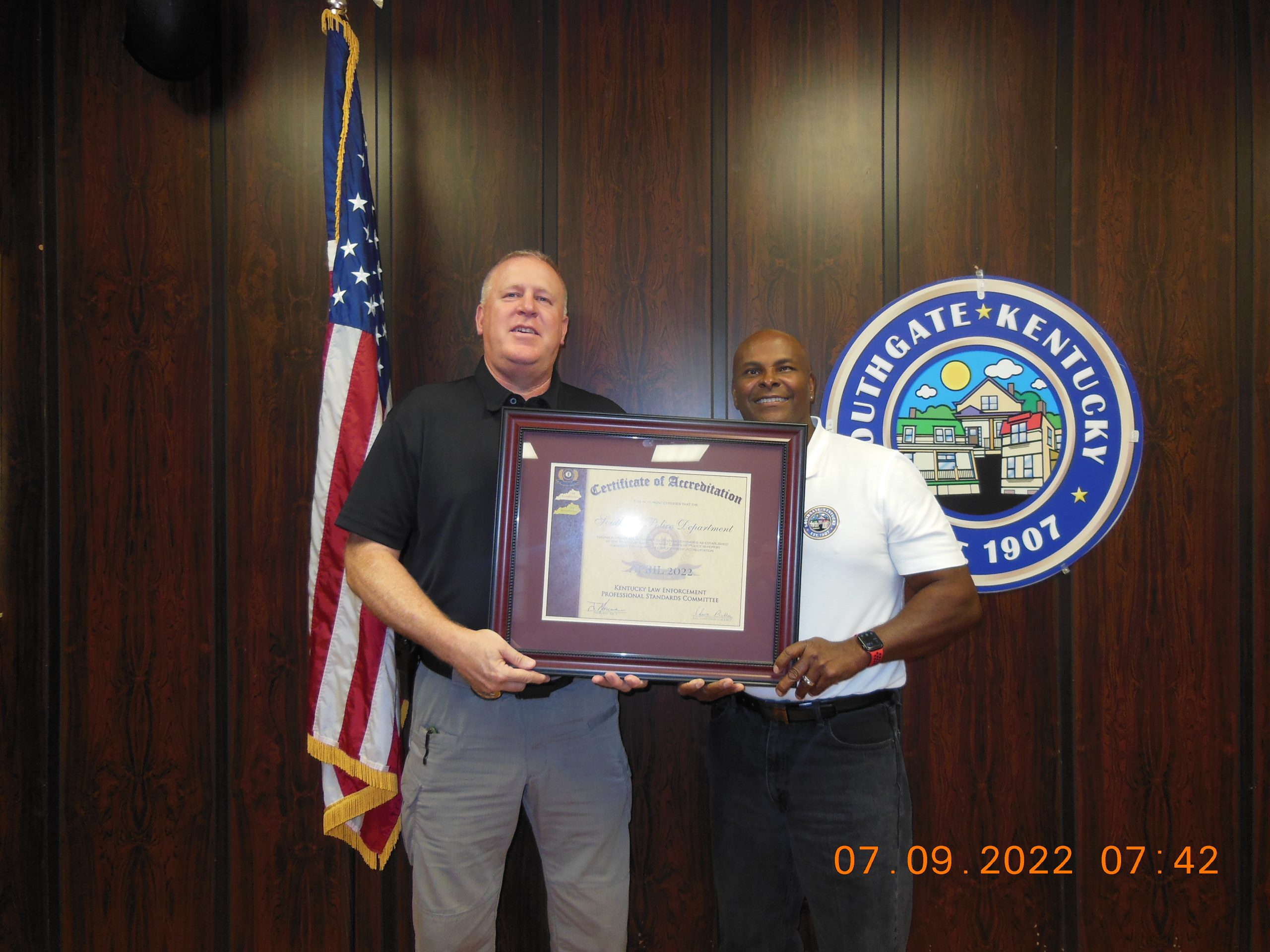 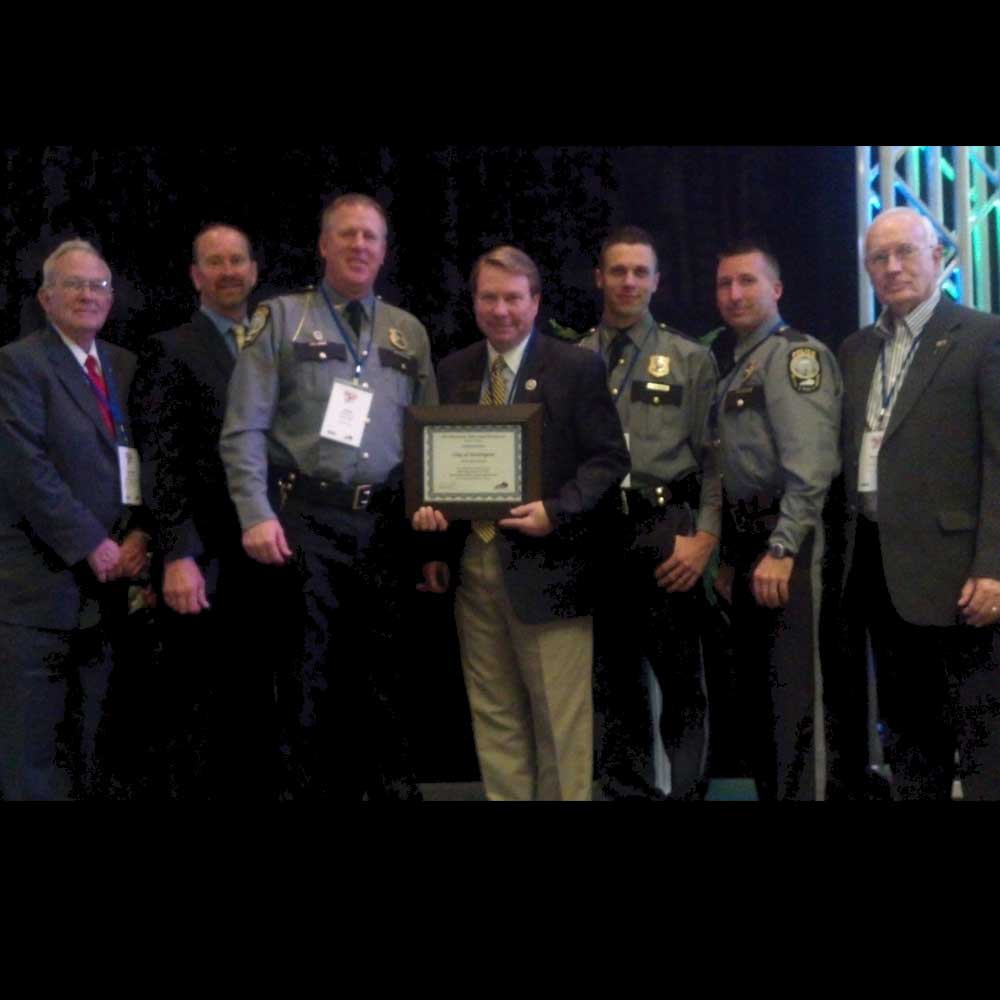 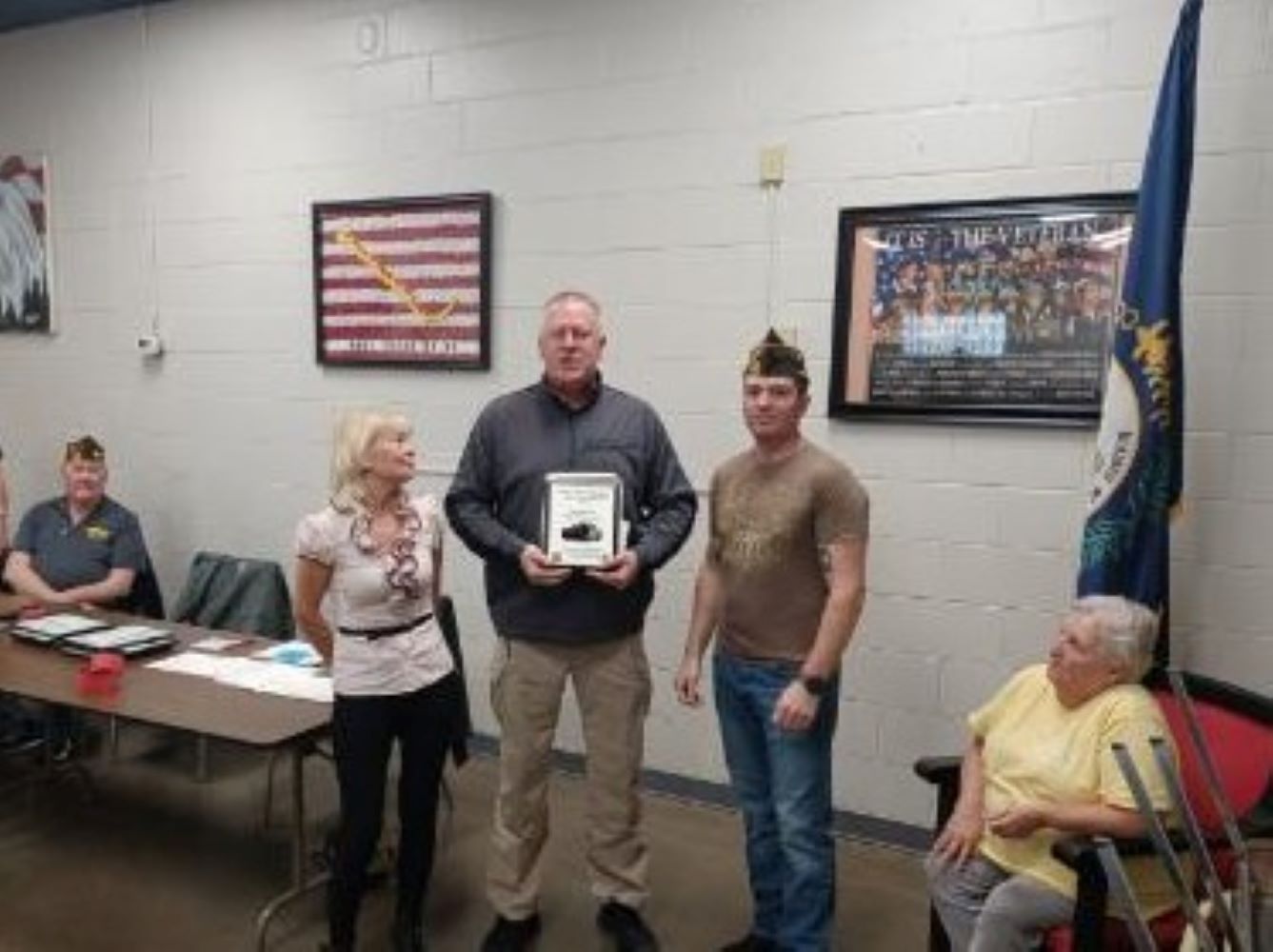